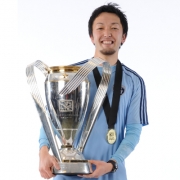 Kentaro "Kenny" Ishii, ATC, PRT was featured in the spotlight article in Cramer's First Aider Newsletter. If you haven't seen this newsletter in your inbox, Kenny did a great job discussing PRI and his work as the Head Athletic Trainer and Rehabilitation Coordinator with Sporting KC MLS team. CLICK HERE to read the article!

Boy, you missed a good weekend.

IFAST hosted Jennifer Poulin and her rendition of Myokinematic Restoration this past weekend.

We had a great group of people. And we had dinner.

And we welcomed our Nebraskan special guest, Matt Hornung!

Whether you’re a therapist or a strength coach, you need to take this course. And you need to start coming to IFAST for your PRI needs because we have too much fun. 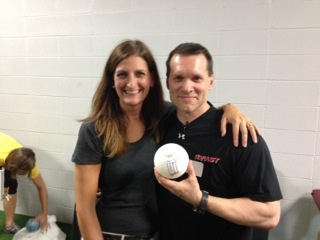 I am not really sure where to begin.. I had one of the BEST times teaching Myokinematic Restoration at iFAST this past weekend.  Bill Hartman and his staff overwhelmed me with their kindness and passion for PRI. From the moment I arrived with Matt Hornung at the Spring Hill Suites to the send off gathering on Sunday night, I felt like I had known these course attendees my whole life. .  We all learned the Power of Position, Patterns, Performance and Parasympathetics for our atheletes and patients.  And they all got Poulinized in the process. The theme of this course was “AH HA! And Say What??"  We had a diverse group of clinicians from PTs, ATC’s, MT’s, CSCS’s, DC and PT students.  PRINATION is quickly evolving into PRIWORLD as one attendee, Aaron Boyle came from Australia to immerse himself in PRI with like-minded clinicians.  We came full circle on Sunday afternoon as the “Say What’s?” turned into “AH-Has”!  The new clinicians were enlightened to patterns that had come to appreciate with a different PRI lens. Thanks again to IFAST for making my cheeks hurt from laughing all weekend along! 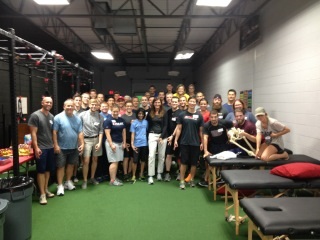 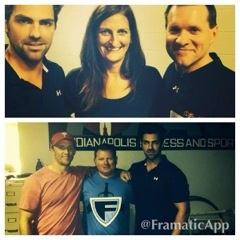 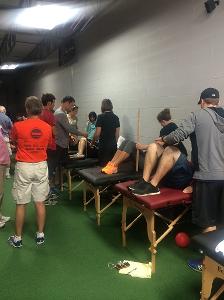 Myokinematic Restoration was my first live course that I’ve taken since starting with PRI about a month ago. The course was held at IFAST, the facilities were top notch but the thing that blew me away was how welcoming and genuine the people at the course were. I walked in not knowing a soul and I walked away feeling like I was leaving a family behind. I had never been to a place where people were so excited about learning, we all soaked it up.

My “aha moment” was when we were going over the Hruska Adduction Lift Test and I realized that every single movement in it reciprocates a part in the gait cycle. Jennifer did such a great job teaching and targeting her talk to the group of people she was speaking to. Her passion was contagious and the energy of the room matched her.  This was by far my best professional experience. What was your first “aha moment” of your first course? 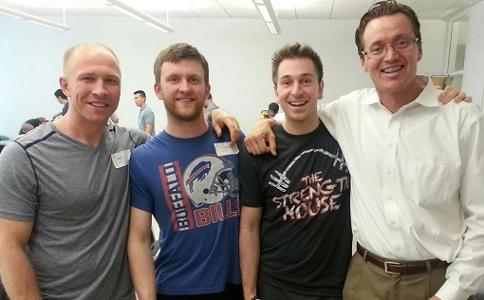 Had another fantastic weekend in Beantown with Art Horne and the fantastic group at Northeastern University teaching Myokinematic Restoration. What a thrill to stand at the front of a theatre type lecture hall with over 50 brilliant professionals who were so dialed into the science of PRI. Loved meeting the strength staff from Harvard University and getting a feel for the passion and commitment to excellence had by @IronCrimson. You guys were a welcome addition to the passionate crowd we already enjoy there in Boston. 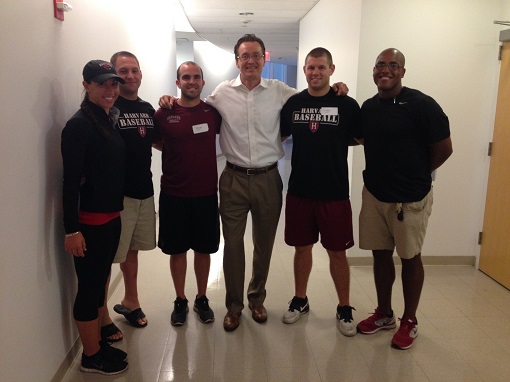 Also grateful for all three of my lab assistants, Donna Behr, Chris Poulin and Michal Niedzielski All the great feedback from the class confirms that you guys are every bit as good as expected. Michal, your physics calculation on the extra Newtons of rotational force available to the young girl with full hip rotation vs the restricted girls was phenomenal. And the tweet of the weekend has to go to you Art Horne (@BSMPG_1) when you sent out this gem: "Don't Internally Rotate until U Approximate, least U Compensate".  #BOOM! 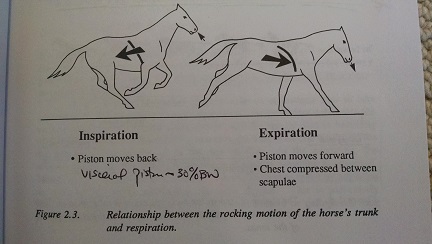 I continue to dive deeper into the physiology, anatomy, and biomechanics of both horse and rider, in a passionate effort to understand how 2 asymmetrical beings come together to produce fluid, balanced, floating movement in the world of equestrian disciplines. This is a rather lofty goal I have set for myself, because this type of movement is rarely achieved, EVEN at the elite levels of Dressage. CLICK HERE to read more!

I just received my first PRC application in the mail! Reminder that the Postural Restoration Certified (PRC) deadline is September 15th, and since it will likely be another large group, we have limited the credentialing program to the first 30 applicants.

If you are preparign your application, and have any questions, please call or email me!

Anybody know how to get ahold of a Protonics Brace? 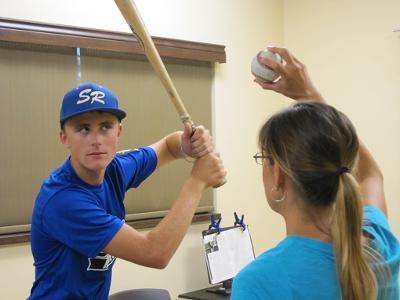 We are excited to announce a new PRI Vision course, PRI Vision Integration for the Baseball Player! This course will be taught by Dr. Heidi Wise and Ron Hruska, and will be offered the day after the PRI Integration for Baseball courses scheduled this November.

"This will be a different course from our Postural-Visual Integration course.  We we will be introducing assessments specific to baseball that help those working with the players in the training room understand when the visual process is affecting players’ physical ability to bat and throw.  There will also be concepts and activities taught that can be used in the training room and on the field to help reduce negative visual influences on the visual influences on these abilities, even without additional integration with an optometrist. “ – Dr. Heidi Wise, OD, FCOVD

To learn more about this course and to register click here.

There is a fairly common phrase in medicine that states: “When you hear hoofbeats, think horses not zebras.”  It was used in the 1940’s by Dr. Theodore Woodward of the University of Maryland Medical School while teaching medical interns.  To this day, ‘zebra’ is the American medical slang for coming up with an elaborate diagnosis when a more common explanation is more likely.  (Gotta love Wikipedia sometimes).

However, I remember a surgeon I worked with about 20 some odd years ago, my first real mentor, telling me once:  “Sometimes when you hear hoofbeats, it’s not horses, it IS zebras.”  It was then I began to realize the complexity of the human body and the incredible responsibility I was taking on when people entrusted their care to me.

I share this with you in part because I have had an interesting case which ended with a unique diagnosis and it reminded me of the zebras that are lurking all over our patients.

Without going too much into the scenario that I believe most of us who are trained in PRI are familiar with, which is: “I’ve been to a bunch of other people who have evaluated and treated me and no one can really seem to figure out what is wrong with me.  Dr. XX sent me to you.”  Which fairly quickly turns into: “I can’t believe how much better I have been feeling!”

I do like to clarify with these people that I’m just the messenger :)

Fit, middle aged woman who had a fall off a horse >8 years ago and fractured her sacrum.  She had been able to get back to some degree of activity, but was limited with increased walking, any jogging, limitations with her skiing and problems with being in any one position--sitting or standing--for periods of time.  MRI to spine and hip ruled out underlying pathology in the spine and hip, for what they were looking for, and one of the cleanest looking pelvis x-rays in terms of position and alignment I have seen.

L AIC and bounced around between a PEC and B BC early on, as she over-abdominalized (my word) everything.  Very compliant which helped a lot in her management and she was very aware of her positioning and making appropriate corrective changes.

She progressed very well with her care and she noticed other things which she had been dealing with were clearing up as well (back and shoulder issues).  She found her activity level was able to increase commensurately and as a big skier, she really liked the techniques she was given which helped her with her left-footed turns (turns to the right).  Neutrality above and below the diaphragm would go back and forth at times, but she consistently presented with HALT scores of at least 3/5.

Her problem was residual discomfort deep in her left lower gluteal / ischial tuberosity region.  Technique after technique were introduced to address the pelvic floor, stretch posterior capsule, manual interventions to this area often helped, but sometimes didn’t, and self-soft tissue work (i.e. ball/foam rolling to the area) did not maintain mobility.  Palpable thickening of the long head biceps femoris / quadratus femoris region and we just couldn’t get it to “shut off”.

These are the kind of things that keeps me awake at night, saying:  “What am I missing?!”   (Orthotics and oral appliances were assessed for as well).

Her history and palpation also suggested a sacrococcygeal issue which external techniques did not reduce.  I sent her to a gifted osteopath I use for further workup of an anteriorly displaced coccyx.  X-rays confirmed this, but it also showed that. . . . her sacrotuberous ligament had calcified--completely!  What I had perceived as an area which wouldn’t work right, turned out to be something that was, well, never going to work right.

I am aware that we all have similar stories we could share and it is so easy to get hung up on the desire to try and figure it out and provide a solution.  I was chasing pain in some ways, thinking I could provide an answer and solution to make it all go away.  But I was also chasing inconsistent findings, which is what I kept trying to attach to her ongoing low-level symptoms.

She is very pleased with where she is at, fully aware of her HEP and self-management and is very grateful with the care she received from, well, all of us reading this.  The treatment she was provided “changed her life” in many more ways than just the problem she came to us with.  But an important reminder to remember the zebras that we all have and that what we are able to offer our patients is truly a gift, but it is something that we should recognize has its limitations.