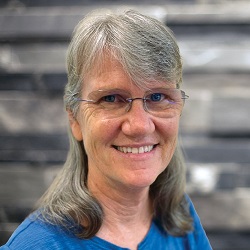 Jennifer received her bachelor's degree in PT from the University of Maryland in 1985. She then moved to England where she obtained her Bobath Certification in Treating Adult Hemiplegia. Gaining this early insight into how a stroke on one side of the brain manifests, not simply with regards to contralateral motor and sensory losses, but with regards to their lateralized differences in language, tone, sensory perception and behavior changes, influenced her entire clinical career; a career which spanned a variety of settings. Jennifer has worked in home health and multiple orthopedic outpatient clinics, she was the PT for Olympic Weightlifters in Samoa, became a ACSM Personal Trainer, became a Bike Fit Professional and then, after a close friend of hers was diagnosed with Parkinson’s Disease, Jennifer developed a special interest in treating this population. She became certified in LSVT-BIG, Parkinson’s Wellness Recovery (PWR!) and Rock Steady Boxing (RSB). She developed a PD-specific tandem cycling program, led a RSB boxing program, and organized a National Parkinson’s Association, grant-funded exercise retreat that included Dance, Tai Chi, Nordic walking, and Cycling.

This straddling of different “specialties” throughout her professional career granted Jennifer the opportunity to see more similarities than differences between her orthopedically and her neurologically labeled clientele. They all appeared to be driven by ‘human’ patterns, patterns she wanted to better understand. Therefore, in 2007, she returned to college, enrolling in the doctorate PT program at the University of NC. She received her DPT in 2009. During her 2 years at UNC, she found that although the central nervous system was covered extensively, the autonomic nervous system and brain waves (frequencies) were only covered marginally more than they had been 20 years earlier - and that evaluation and treatment approaches were still based primarily on human symmetry.

Fortunately, being at a university gave Jennifer open access to not-exclusively-PT medical journals, and through independent exploration of research regarding how the brain and body both physically and physiologically communicate, she noticed that although relevant discoveries were being made, they were not yet being translated into accepted, evidence-based clinical practices. The literature cited that it usually takes 17 years for a verified, scientific finding to make it into mainstream practice, and possibly even longer for physical techniques or practices since they typically aren’t as profitable or as heavily marketed as pharmaceutical discoveries. Jennifer based her doctoral research on 'Translational Medicine' - i.e. on better understanding how to best translate scientific findings into clinical practice within the field of Physical Therapy.

A few years later Jennifer read a bike fitting article written by Lori Thomsen that proved to be very translational. Not only did this article cite many of the consistent patterns that Jen had been seeing, but it also explained why these asymmetries were present and introduced a way to clinically treat them through the framework of something called Postural Restoration. This article was Jennifer’s first introduction to PRI and within a month of reading it, she had already taken two PRI courses. Over the next couple of years she took a dozen more courses until, in 2015, she earned the designation of Postural Restoration Certified as a result of advanced training, extraordinary interest and devotion to the science of postural adaptations, asymmetrical patterns, and the influence of polyarticular chains of muscles on the human body as defined by the Postural Restoration Institute.

Since discovering PRI Jennifer feels she has found a solid, scientific platform that offers algorithmic guidance in the treatment of ALL humans, whether they are labeled as having a neurological or an orthopedic issue (since the underlying principles are the same). This algorithmic guidance, however, not only allows, but embraces and is overwhelmingly supported by past and present research regarding sensory perception, autonomics, respiration, and lateralized functional biases, subjects that have not always been translated into traditional PT programs.