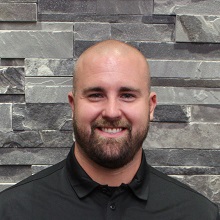 Steve is currently the Director of Health and Performance for the Oilers, through the Oklahoma State University Center for Health Sciences. In the off-season, he assists in teaching Master’s Level Athletic Training Students at the medical school, and devotes time to performing treatment and rehabilitation on local Fire Department tactical athletes.

He simultaneously is the founder and CEO of the Lintern Athletic Integration Center working with athletes and populations of all skill levels in Tulsa, Oklahoma. He works with the Sports Performance Institute (SPI) in Tulsa as a part of their consulting performance staff.

Steve previously worked for Advanced Orthopaedic Specialists in Fayetteville, Arkansas as the Head Athletic Trainer for all Club Sports at the University of Arkansas, while also working in different capacities for the Razorbacks football team from 2010-14. He interned with the Cleveland Browns in 2008-09 and returned in 2012 as a Seasonal Intern Athletic Trainer. He has also worked privately with multiple Top-10 American Marathoners, Olympic Runners, World Class Triathletes, MMA athletes, professional boxers, professional basketball players, All-American Collegiate Swimmers and many other high level athletes in a private capacity. Steve double-majored in Athletic Training and Exercise Science in 2010 at Mount Union College, where he played football and was part of two National Championships. He completed his Masters Degree in Kinesiology with a concentration in Exercise Science at the University of Arkansas in 2011.

Currently Steve hits for Long Drive For Heroes, to raise awareness for PTSD, as a long driver competing in mostly local events.  Steve and his wife Anna are both Ironman Triathletes and live in Tulsa with their son Lukas, daughter Roselyn Jo and Australian Heeler, Rinny.