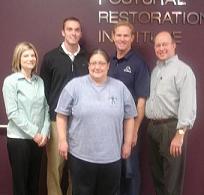 For nearly 70 years, Paul Bunyan and Babe, the Blue Ox have enjoyed fame of massive proportions, even being named by Eastman Kodak as one of the most photographed icons in the nation. But this year, Paul and Babe will have to get used to the dark — the Bemidji spotlight now shines on a new set of hometown heroes: the men’s and women’s Olympic curling teams.

For the athletes and for the entire Bemidji community, the chance to represent the U.S. in the Olympics was a dream come true. Behind the scenes, though, for two members of the women’s team, this dream — so close to becoming a reality — was slipping away.

Just weeks before they were to fly out to Torino, Jamie Johnson and Maureen Brunt were worried, to say the least. During what should have been key training and preparation time, the women found themselves sitting practice out, nursing painful injuries rather than curling.

Jamie’s pulled hamstring and Maureen’s IT band injury (which caused the muscles of her hip, knee and ultimately her entire left leg to be painful and tight) could not have happened at a worse time. “At practice I was already at the point where I couldn’t curl,” Maureen remembers. “I was so nervous that the injury would be a huge setback in Torino.” Jamie, too, was affected “not only physically, but mentally as well.”

Determined to get back on the ice fast, the women turned to MeritCare Bemidji physical therapists Megan Bollinger and Paula Vigen for help. Vigen had worked with Maureen before, but recognizing the need for immediate results, she consulted Bollinger about a new revolutionary technique called postural restoration. “This technique is designed to improve movement, posture and breathing,” says Bollinger. “It targets the body as a whole by using special exercises and repositioning to help the body function more efficiently as one unit.”

Very aware of the fast-approaching Olympic games, the physical therapists wasted no time in beginning treatment. Attending practices, visiting with the coach, consulting the trainer and guiding and training the women, Bolligner, with Vigen’s support, used postural restoration to quickly get the women back on track. “With this intensive program, we were able to achieve excellent results quickly, accomplishing about two months’ traditional strengthening in just one-and-a-half weeks,” Bollinger says.

Bollinger and Vigen were very pleased with the women’s progress. “It was very exciting to treat these individuals and see the great results that occurred. It’s always rewarding when patients do well after therapy,” says Vigen. No one, however, could have been happier with the outcome than Maureen and Jamie. “The treatment really helped with the pain — it was such a relief!” Maureen noted. For Jamie, the therapy went above and beyond treating her symptoms; it even improved her pre-injury aim. “I learned so much about myself and my body. It [the postural restoration technique] will help me continue to improve my game,” Jamie said.

With the help of the MeritCare Bemidji physical therapists, Jamie and Maureen were able to overcome their injuries, regain their confidence and ultimately live their dream of competing in the Olympic games. During their time in Torino, the women, with the help of their trainer (who received guidance from Bollinger), continued their postural restoration exercises. Neither was bothered by her injury during competition.

Though the Olympics are over, both Jamie and Maureen plan to continue to use the techniques they learned during their treatment, whether injured or not. Jamie, in fact, never intends to stop. “I plan to keep curling for a very long time and I want to be sure my legs and body can keep up,” she says. “I will use the exercises for the rest of my life.”

Like Paul Bunyan and Babe, Jamie, Maureen and their peers on the men’s and women’s Olympic curling teams have become icons. Their hard work, dedication, talent and passion have captured admiration not only in Bemidji, but on a worldwide scale as well. The legend of the Bemidji Olympic curlers, however, is still being written. “The beauty of curling is that there’s always more to strive for,” says Maureen. “Now that we’ve gotten a taste [of the Olympics], we definitely plan to be back.”

The following article has been added to PRI references for Zone of Apposition.