You recently returned from Great Britain consulting with professional golfers.  Tell us how this came about?
I was contacted by Kevin Duffy in the spring of this year.   Kevin is a golf fitness specialist in England who owns Duffy Golf Fitness and is integrating PRI with his professional golfers on the European Tour.  At that time he had a player who had won two tournaments in a row and he was strictly performing Postural Restoration exercises for his fitness program.  Kevin is pretty much self-taught in PRI through a combination of the home study courses and studying the manuals that he’s purchased. Through his own research, Kevin found out that I was heavily into the application of PRI and how it relates to golfers and we hit it off right away.  We began communicating through Skype on a regular basis and I would help him understand the when and why of how to progress his players programs with PRI.  About a month after we began communicating on Skype, he invited me to England to help him evaluate his players and design treatment programs based on their PRI assessment of feet, pelvis, brachium, neck, dental and vision. 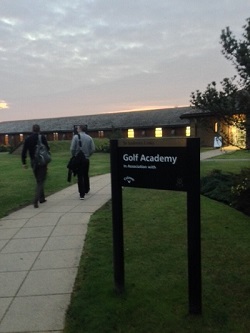 Early mornings at the office in St. Andrews.

You went to a professional tournament immediately upon arriving, how was that?
My first assignment was to evaluate several of his players in St Andrews while they were there playing in the Alfred Dunhill Links Championship.  This is a pro-am tournament much like our AT&T in Pebble Beach so it had its own challenges.  First of all, the tournament is held at three different courses and the cut is made after three rounds.  Together we took a few players through an entire PRI evaluation including PRI orthotics and mapped out a plan on how to progress each one of them using strictly PRI repositioning, inhibition and strengthening techniques.  It was challenging to meet them during the pressures of a tournament but it was also great experience.  Talk about compliancy! Kevin had done a tremendous job getting the lads to appreciate left AFIR and insisting they feel a left glute med.  I had a tremendous amount of pride for PRI given that here was a very intelligent English trainer who completely understood the concepts of PRI and how to apply them and the players themselves were meticulous in performing the exercises.  Our typical days during the tournament were spent getting the players ready to play with some common stretches like left posterior outlet inhibition, right adductor inhibition and right apical expansion.  After their rounds they would return for a treatment session which consisted of manual work and corrective exercises based on how they presented that day. 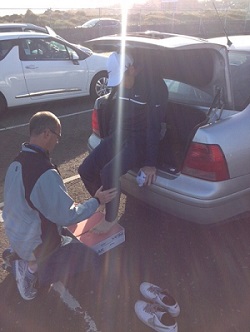 Taking impressions for PRI orthotics in the parking lot at St. Andrews!

After the tournament was over, how did you spend the remainder of your trip in England?
We drove from St Andrews on Sunday, September 29th to Manchester, England.  Manchester is where Kevin lives and will be opening his own office in the next couple of months.  The next few days were spent evaluating players for PRI orthotics and progressing their treatment programs.  We would either see the players at a golf course in Leigh, travel to their house or
work with them at Pete Cowen’s driving range in Rotherham.   This was considered an off week for the players so all of them were very relaxed and motivated to work on their individual PRI programs.  Most of the players that we worked with were under 30 years old and had already developed a significant amount of back pain as a result of playing golf in a patho-PEC pattern.  One of the players took 16 weeks off, worked with a Physiotherapist on traditional exercises only to return with the same amount of pain.  After working with Kevin for a short period of time he is now playing consecutive weeks, making cuts and feeling very little back discomfort. 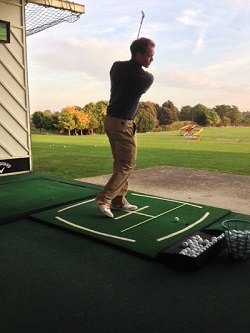 Special thanks to Mike Walker who allowed me to observe him at Pete Cowen's driving range.

Was there any difference in working with the professional golfers in Europe vs those who you treat in America?

When you work with professional golfers, you have to be very sensitive to impress upon them that you are not going to affect their swing.  Most of them have swing coaches, putting coaches, sports psychologists, physiotherapists, trainers and wives or girlfriends.  All have a role and it is your job to get their bodies functioning in a way that will make their golf swing more efficient but most importantly keep them off the injured list.  PRI is the perfect complement to golf because most players and good coaches know golfers need a right glute max, left abdominals, left adductor, left glute med, serratus anterior and right upper trunk rotation.  I had some great dialog with Mike Walker who is a golf instructor at Pete Cowen’s range in Rotherham.  Mike and Pete both understand the concepts that we are applying with golfers but didn’t know that the challenges that right handed players face is that we all have an underlying pattern of asymmetry that makes some of their teaching very challenging.  For instance, Mike talked about the need for the upper arm (humerus) to be centered in the socket (glenoid) at the top of the backswing.  We know from a PRI perspective this is nearly impossible if you are in a right BC pattern, which most golfers are.  Kevin can make Mikes job as an instructor much easier if he can neutralize the players left AIC and right BC chains.  To my knowledge, these concepts are not taught in any other golf fitness or rehab program in the world.  It is refreshing to see that players in Europe are getting great results with PRI, but now it needs to become more main stream on the PGA and LPGA tours. 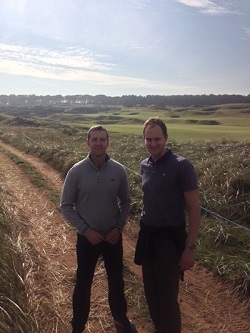 What does the future hold for your new venture in England?
The response from the players was such that they would like to see me come back periodically throughout the year.  Kevin and I are now planning perhaps five trips next year to follow up with the players that are currently in his system and help recruit new players into the pipeline.  Kevin is teaming up with Martin Higgins, a Physiotherapist who has also been studying PRI and they plan to open an office in Leigh, which I hope to consult on.  We are also working with the Postural Restoration Institute® to offer the first ever PRI course in England.  Sometime in July of next year around the British Open, my wife Jen and I hope to travel to England to offer Myokinematic Restoration and Pelvis Restoration courses.  Jen will teach and I will relax and play golf, just kidding.  The Open is at Royal Liverpool, not far from Manchester so this will allow us a chance to travel to Scotland to see our relatives and work with the players to help get them ready for The Open.   Stay tuned for those details. 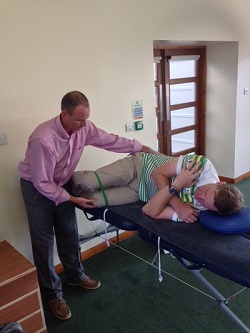 Can you share the names of the players who you worked with?
Out of respect for their privacy, I cannot give details of their conditions or patterns but I will share their names.  I would like to thank all of them for being very hospitable and for welcoming me into their lives for the week.  They are Matt Baldwin, Danny Willet, Tommy Fleetwood, Dave Horsey, Stephen Gallacher, Lee Slattery, Brett Rumford, Alejandro Canizares and Paul Waring. 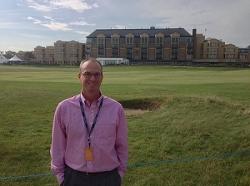 St. Andrews, the birthplace of golf!

You moved this past year to Pinehurst, NC. Tell us a little bit about your new business, Sandhills Sports Performance?
This past year was a bit of a transition year for us. I have opened a new practice with a strong emphasis sports performance and rehabilitation. This practice allows me the opportunity to consult with a very diverse client base from retired golfers, Special Forces, high school athletes, professional baseball, physicians and middle age women looking to be in the best shape of their lives. I spend most of my days focusing on athletic rehabilitation in the form of helping golfers with bad backs. This usually involves looking at their swing on video and breaking down the biomechanics. I’ve also had success involving a K-vest system which quantifies the amount of movement that golfers have throughout the swing. There is a large military base in Fayetteville and many of the Special Forces and their families seek out postural restoration services both for performance and rehabilitation. Around here, Crossfit is popular and it’s typical that those participating in Crossfit are in a strong PEC pattern. It’s been fun integrating PRI into the programs of some of these athletes to allow them to continue to train the way they want but with respect for pelvic position, rib cage orientation, respiration and stance. The move to Pinehurst has allowed us to expose a new community to PRI, yet be accessible for consultation opportunities when they arise.