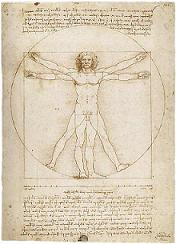 Thanks to Josh Olinick for sending us this email…

Vitruvius, the architect, says in his work on architecture that the measurements of the human body are distributed by Nature as follows that is that 4 fingers make 1 palm, and 4 palms make 1 foot, 6 palms make 1 cubit; 4 cubits make a man’s height. And 4 cubits make one pace and 24 palms make a man; and these measures he used in his buildings. If you open your legs so much as to decrease your height 1/14 and spread and raise your arms till your middle fingers touch the level of the top of your head you must know that the centre of the outspread limbs will be in the navel and the space between the legs will be an equilateral triangle.

The length of a man’s outspread arms is equal to his height.

The preceding is the complete translation of the text accompanying Leonardo DaVinci’s Vitruvian Man. It is actually a translation of Vitruvius, as Leonardo’s drawing was originally an illustration for a book on the works of Vitruvius.