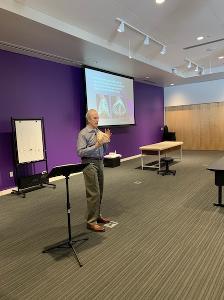 The Midwest started warming up to a balmy 22 degrees on the way to reaching almost above freezing on Saturday morning for the first Postural Respiration Live/Live Stream course this year. There were seven live attendees some of whom drove over 5 hours on slick and icy roads to take their first Postural Respiration course while almost 40 others from all over the country, and even internationally from Slovenia, attended this course. Ron and I had a discussion the day before I taught and it was a real inspiration to be able to emphasize to the new students the concepts of not just rib movement and diaphragm function but the importance of pressure and flow inside a chest wall and how that not only affects position and posture but every system in the human body. We spend a lot of time on the orthopedic consequences of neurologic patterns in this course but it is what is inside the chest wall in terms of how we direct air into chambers and how that affects whether ribs move up or move down, and torsos left or right as a critical element of Postural Respiration and all PRI courses. The Posterior Mediastinum has become more of an emphasis than ever before along with the role of the first rib in initiating the lifting of the rest of the ribs below it during respiration. This class really got the relationship between the right apical chest wall and the left posterior mediastinum with the role of how important inhibition to these chambers of the chest wall is.

One of the non manual techniques we focused on was the Standing Serratus Squat and the importance of learning how to perform it. This is one of PRI's more difficult positions to competently perform and that there are often precursors, especially with reaching and squatting techniques, to help facilitate this most important technique. Just because it is challenging to perform doesn't mean that students shouldn't master it and then teach their patients. This is one of many techniques that help strengthen an individual's diaphragm and give them a "sense", which was one of the key words of the weekend, of thier ribcage moving backwards!

And for forward locomotion, that is, to move forward, one most move a ribcage back! Questions came in fast and furious which is a delight for instructors since it helps to gauge where the attendees are in their understanding and to reinforce and repeat concepts that are needed to provide a good foundation to understand this course well enough to begin to apply. The students in this course were helping teach Postural Respiration by their re-states and questions with energy and enthusiasm. Shout out Meghann Vanslager and Jennifer Bacon who drove from Kansas then had a 5 hour drive home with work the next day! Thanks to Ian Katanec for being on a 9 hour time difference in Slovenia and everyone else that spent their weekend with us as over half of the attendees that were either brand new to PRI or first time attending Postural Respiration. Most of all, thanks to RJ Hruska who was my wingman performing audio and visual expertise with changing camera angles for lab and keeping things going smoothly during these virtual attendance times.