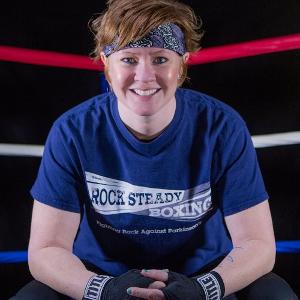 "Watching individuals with Parkinson’s Disease participate in boxing when I spent time with Jennifer Smart in North Carolina last Fall, reminded me of the need for the human spirit to elongate appendages while concurrent body contraction occurs. The movement of flexing a shoulder as the elbow extends disengages the neck, momentarily and reflexively. It is art, it is personal, it is rhythmic and it is limited coordination done by someone, who for a moment, recognizes a functional beneficial event that required regaining balance from a floor the arm uses to “strike”. Beautiful un-timed imbalance followed by a timed balance act for regaining postural control, without needing or requiring tremor. Such a rewarding basal ganglia bi-hemispheric activity to watch, but more importantly to experience. Shortly after arriving back to Lincoln, I bought and hung a bag in our clinic. Now if I could just learn how to dance around the bag as it pushes me around when I punch it, as it punches me. I decided that it probably would be best to wait and listen to Kristy Rose Follmar, a former World Champion professional boxer, before I hurt myself." 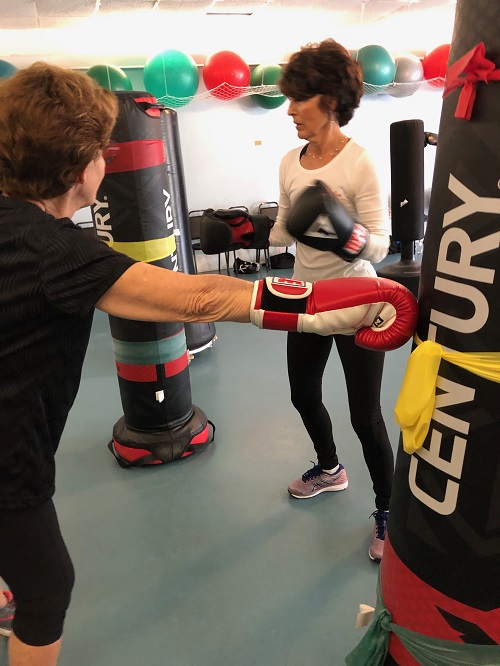 Newman, a young on-set Parkinson’s sufferer, discovered that intense exercise using a non-contact boxing-style training regimen was slowing down the progression of his symptoms. Follmar understands through her experience as a professional athlete the benefits that boxing style training can bring to people with Parkinson’s in addition to Parkinson’s specific exercise.

Kristy Rose Follmar is one of the architects of The Rock Steady Boxing Method, a curriculum that combats the physical and emotional effects of Parkinson’s. Follmar uses her experience of professional boxing and formal education in the fitness industry to design curriculums specific to varying levels of Parkinson’s disease.

Kristy’s presentation is titled “Rock Steady Boxing: The Fight Against Parkinson’s & Community-Based Medical Collaboratives”. This presentation will cover our history and an intro to Rock Steady: our story, our methodology and message of Hope to help people with Parkinson's Fight Back against their disease.  Also, a discussion about how Rock Steady has developed a community-based collaborative between local healthcare professionals and community-based Rock Steady programs.

If you have not registered for the 12th Annual Interdisciplinary Integration Symposium, be sure to register soon. The early registration rate of $525 ends on March 26th!