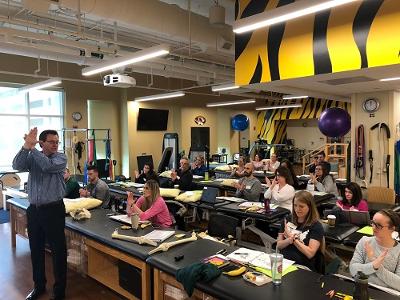 Enjoyed a great weekend at the University of Missouri teaching the primary course classic Myokinematic Restoration. This course is essentially an expanded and updated version of my very first PRI course, its the first course I learned to teach as a new Faculty member 20 years ago, with material that continues to mean a lot to the work I do on a daily basis. Thank you to Joe Pope, DPT, PRC for assisting me with the course and helping give all the attendees a great overall experience. Your additional comments from your own experience learning the science of PRI were very valuable and I could tell were much appreciated by course attendees.

The course was taught at the Missouri Orthopedic Institute on South Stadium Drive across the street from the Hearness Center Basketball Arena and diagonally within view of the neighboring Faurot Football Field. Seeing this field brought back a memory from my college days that I may share just because its nice to reflect on the glory days, when Nebraska Football was dominant and we expected to win the National Championship every year. I'm also sharing this memory for those of you reading this who are not old enough to remember what I'm talking about, because its something you should know about.

The #1 ranked Nebraska Cornhuskers rolled into Columbia back in 1997 expecting an easy win and they ended up pulling out a squeaker that has come to be known as "The Miracle in Missouri". If you don't know what I am talking about (or even if you do), you should do an internet search and watch the spectacular (and very lucky) play called the "Flea Kicker". It's a signature memory for Nebraska Football fans in the 1990's and a pivotal reflection point for current fans hoping current Head Coach (and Flea Kicker Quarterback) Scott Frost will take the program back to its glory days. I think Matt Davidson still gets paid to retell the story of that play to anyone who will listen.

Another reason I tell that story is that 1997 was the year I met Ron Hruska. I was a student at the University of Nebraska Medical Center and we had a guest speaker come in one day to teach our physical therapy class about temporomandibular dysfunction. I had no idea at the time that I was listening to a man who would in time have a more dramatic impact on my career than any of the good professors I was being taught by in my current course of study. These professors gave me the fundamentals of joint structure and function, muscle function and general rehabilitation, but I remember wanting so much more in terms of "real-life biomechanics". And it wasn't until Ron presented courses on lumbopelvic and hip dysfunction that I started to feel satisfied thinking through what I thought was really going on.

All of these questions and more are answered in the current version of the Myokinematic Restoration course. How grateful I am that I was able to consider such important questions so early on in my career and that I, like Matt Davidson, so much later in our careers, still get paid to tell my version of the story to anyone who will listen.