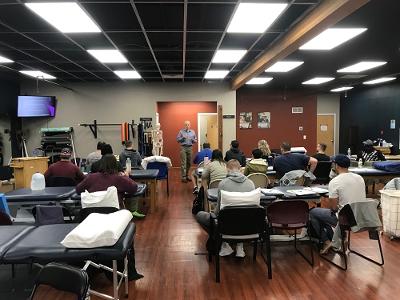 Todd Robbins, PT hosted Postural Respiration at one of his facilities, Robbins Rehabilitation East, this past weekend in Easton, PA.  One of his trusted friends and former co-workers, Brian Buetel, PT, had been telling Todd about PRI since his first PRI experience and strongly suggested to not only attend but to sponsor a PRI primary course. Todd jumped in to be the host while attending his first PRI course. He also brought and personally sponsered nine of his employees with him.  And what a weekend it was for all attendees with two thirds of the class brand new to PRI!

The first PRI course experience can be exciting, challenging, over-whelming, a refreshing change to a status quo, a paradigm shift and very much like being fed water by a fire hose! What is so fun for a faculty member is to see students repeat back a new awareness and concept, put it into an application they experience during the weekend and have an enthusiastic response of wanting more PRI. This weekend was full of these new awareness moments- like the before and after of a non-manual technique or a new way to look at testing that always can be traced back to what shape and position the diaphragm is in and how it drives position of a pelvis and ribcage. Another insight that is always big is that one of the most important muscles of respiration is the left hamstring while IO's and TA's pull a ribcage down, in and back like "hay hooks". The class could see in a new way that muscles on the one side of the body are deficient and some are biased driving us laterally to an end-range position we rely on for a perception of stability.   Superior T-4 is always an added layer of discrimination of patho-mechanical accessory muscle respiration superimposed on top of dominate patterns and position. Watching apical expansion become positive on the left during lab after the Superior T-4, or get air into the right chest wall technique, and the reasoning behind it, was a huge eye opener for the entire class. 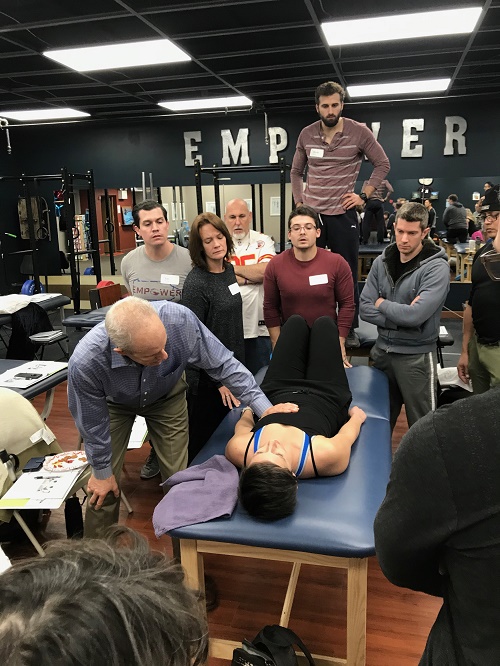 Many thanks to Todd Robbins, PT for bringing his PT staff to Postural Respiration.  It is a leap of faith to try a new approach and he and his crew jumped right in with energy and curiosity.  Big thanks to Brian Beutel, PT for sharing PRI with Todd and being the host site contact this weekend.  His help and support was an instructor's dream and I hope to return soon to Robbins Rehab East. They already have another PRI course subject scheduled for next year. And last but not least a HUGE thank you my veteran lab assistant, Jon Herting who was a valuable resource throughout the weekend!