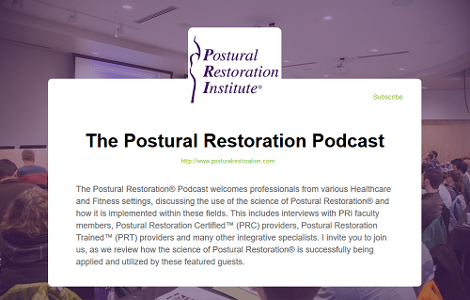 I am excited to introduce "The Postural Restoration Podcast" with #PRINation! Many of you may be familiar with our featured interviews, and you may have even been highlighted on one in the past. We will now be using this Podcast for our Featured
Interviews as a way to better familiarize the general public with not only our Faculty but also our Certified Providers. Check out the description of the first episode below, and I promise that not every episode will be this lengthy!

PS. Make sure to check out the History of PRI - The Foundation of the Postural Restoration Institute (August 2008) written by Ron in 2008, to discover how far we've come over the past decade!

Episode 1: The Foundation of the Postural Restoration Institute

Ron discusses his time in Graduate school pursuing a Master’s in Public Administration after receiving his Physical Therapy degree from the University Of Nebraska Medical Center. His time working at the V.A. Medical Hospital as well as his eventual role as Director of Physical Therapy at St. Elizabeth's Hospital in Lincoln, NE both played roles in his desire to look at and treat the human body through a multidisciplinary, systematic approach.

This led Ron to create other ways of treating patterned dysfunction, initially through the use of the first “Re-Positioning” device called Protonics. Although Protonics looked and seemed to function to many in the orthopedic world as a Patello-Femoral “Brace”, it was actually much more. Using this device allowed him to "Re-Pattern” bi-lateral chains of muscle and look at orthopedics from a Femoral-Patella lens.

Eventually this device left Ron with the desire to move into the private practice setting, in order to dedicate more time to roles with the APTA Association, and more time dedicated to learning and discovering further ways to develop his ideas. Protonics allowed him to connect with and teach other clinicians, including some of the first PRI Faculty members. Following the creation of the Hruska Clinic, Restorative Physical Therapy Services in 1999, Ron worked with fellow Physical Therapist Jason Masek and others to create some of the earliest PRI Non-Manual Techniques.

As this science continued to grow, PRI Director Janie Ebmeier was put in charge of helping to develop what would become the first Postural Restoration course which would later be renamed to “Postural Respiration”. With the foundation of the Postural Restoration Institute in 2000, other courses including the "Influence of the Pelvic-Femoral Complex" which was later called Myokinematic Restoration was a quick addition. We now are proud to offer more than 15 different courses, which have been developed to build upon these three Primary Courses

I welcome you to join us on this journey as we continue to explore how the creation of this science has changed the way coaches and clinicians approach the treatment of the human body."