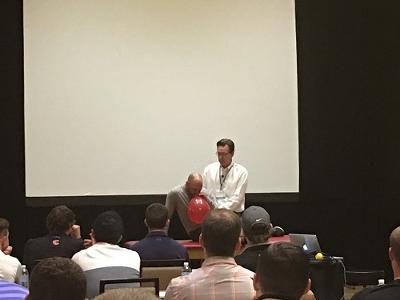 Impingement and Instability- It was an honor to present Impingement and Instability at the Professional Hockey Athletic Trainers Society Annual Meeting in Phoenix Arizona this year to a fantastic group of professionals. The group was primed and more than prepared for the transition to secondary level courses after having taken Myokinematic Restoration and Postural Respiration at 2 of the previous annual meetings, both taught by Mike Cantrell, MPT, PRC. I spoke to Matt Bain, ATC when I was in Vermont a few weeks ago and he said the PHATS organization was first class and that I would have a great experience presenting at their conference. Mike also told me that I couldn't find a better group of professionals anywhere to spend my time with, and after our interactions during Impingement and Instability I have to say you both were 100% accurate. This group was chalked full of first class professionals that made me feel like a member of the family as we learned together and talked shop. Thank you everyone for living up to your billing and making me feel so welcome.

On day one, we got into the power and significance of the frontal plane in athletic performance and got to analyze the gait cycle in terms of the frontal plane differences and demands seen in early stance vs the frontal plane differences and demands seen in late stance in the left AIC pattern. This included a detailed comparison of what happens on the right side vs what happens on the left side, because, well...thats what PRI does. And then we expanded this view of gait performance to the hockey athlete to help us better understand skating performance during starts, stops and turns when performing on the right leg and on the left leg. A big thanks to Matt Bain, ATC for helping us get the video footage of hockey performance in good old Gutterson Arena that allowed us to compare both right legged and left legged starts, stops and turns. The opportunity to review slow motion video as a group really helped us bring together the concepts as it related to performance tendencies on ice. If a picture is worth a thousand words, there's no telling what these slow motion videos did for the course attendees. Very helpful.

With a gait analysis mindset, a frontal plane mindset and also a hockey performance mindset, the group was able to move through the Impingement and Instability material with a central theme and focus. The calcaneal instability section was highlighted by a demonstration of gait and footwear that helped us appreciate the footwear recommendations and reference center training a hockey athlete may need when they are not in their skates. The mechanics of a compromised kinematic chain disrupted by poor performance of the calcaneus cannot be overlooked or ignored. Its always good to rethink conventional wisdom and outline the best practice for each individual athlete based on the objective findings of each individual athlete. The demonstration was a good experience for everyone in the group. The rest of day one consisted of discussions and demos on femoral instability. We spent a lot of time as a group analyzing the oriented or compensated rotational issues of the femur and the tibia as it related to knee function and pain. We looked closely at several of the attendees and were able to appreciate what was going on as we came to a group consensus of how their femurs and tibias contributed to their knee instabilities.

Day two consisted of detailed analysis of ilial instability and scapular instability issues. The ilial instability section included discussions around ischial tendinitis, hip instability and hip impingement. We analyzed the right legged vs left legged turns of a giant slalom skier and by this point in the course, we could all see the relationship to both gait and hockey skating. In fact, we even went back and reviewed the slow motion hockey videos after talking about the skiers and were able to connect the dots quite well. The scapular instability section included a comprehensive demo of all manual rib techniques merited for a scapular instability athlete. Thank you Tommy Alva, ATC for letting us use your rib cage for group teaching purposes. You were great. And lastly, it was great to take a deep look at scapular performance muscle issues like the difference between the lat and the subscapularis and the power of the low trap and the serratus anterior to offset overactity of the levator and the upper trap. Fun stuff that took on a new relevance for both the right and left handed hockey athlete. Thanks again PHATS for inviting PRI to your annual party. It was truly our pleasure to be there! 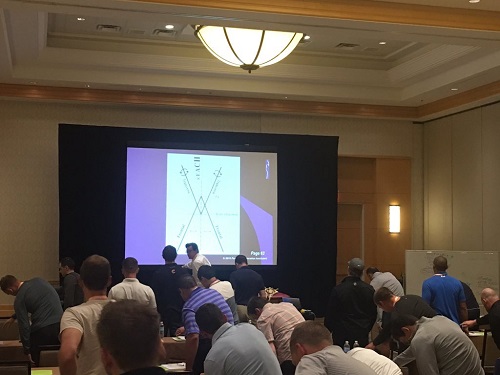 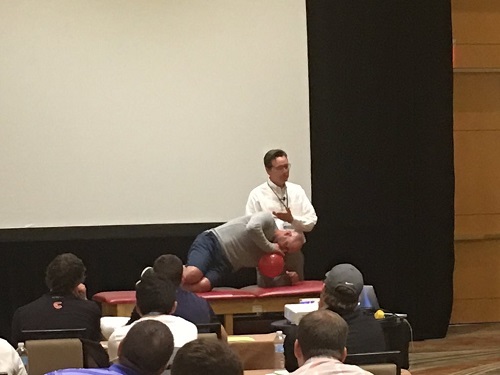 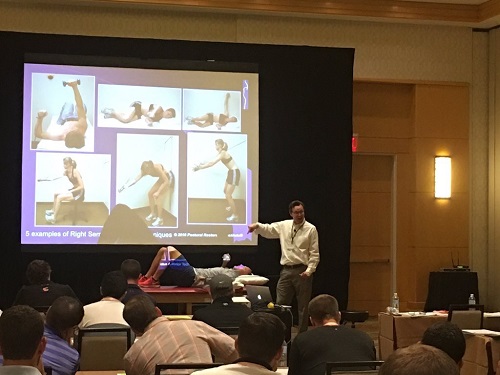