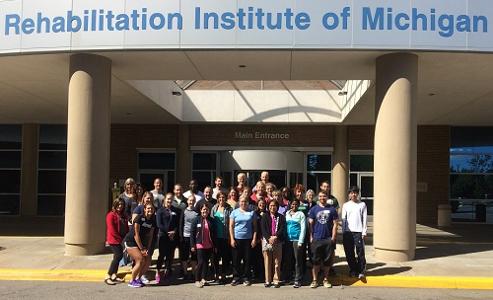 Postural Respiration was taught at the Detroit Medical Center in the Rehabilitation Institute of Michigan building September 10-11, 2016. This course was 2/3 full of new students to PRI and many other first timers to Postural Respiration. This group was enthusiastic from the start and responded well to learning the basics of PRI from providing a foundation with a neutral pelvis then addressing ribcage management of tri-planer air flow. Some of the big hits for new time attendees were that the left hamstring is an essential muscle for pelvic repositioning and is necessary to achieve an agonistic relationship with a left abdominal wall. This basic but essential concept was a huge revelation to even the most seasoned practitioners attending. During lab the concept became very real as femurs started adducting after a non-manual repositioning technique. Of note was one of the PT's in the course had taken a Protonics course by Ron Hruska in 2000! During this course there was time to really correlate PRI testing with position of the diaphragm as it relates to the axial skeleton. Then being that this course has manual techniques, one and two person manual techniques were described and demonstrated numerous times with reasoning when and why a manual vs. non-manual technique would be used. Detroit is a great city and this was a great venue! The feedback was Michigan doesn't get enough PRI courses and they want more!