We are excited to announce that Rich Tenney, Kyndall Boyle and Aaron DeBord have collaborated together to publish an article in the Physiotherapy Canada journal! We are excited to share this article, Influence of Hamstring and Abdominal Muscle Activation on a Positive Ober’s Test in People with Lumbopelvic Pain. Congratulations on your hard work and thank you for your dedication in helping to educate others about the science of Postural Restoration through journal publication!

If you are a member of the Journal of Cranio Mandibular Practice you have probably read the July issue titled “Multidisciplinary”.  This issue covers how crucial it is to integrate with other disciplines to achieve the most desirable outcome for the patient.  In addition, there is a spectacular editorial written by Dr. Gerald Murphy on how necessary he has found the multidisciplinary approach to be in his practice.  After reading the editorial Ron Hruska felt compelled to write the author and share a few comments with him:

“Just read the July issue of The Journal of Craniomandibular Practice and wanted to write and tell you how much I enjoyed reading your segment on Dry Bones.  I have always tried to integrate disciplinary medicine and dentistry in my practice and always remember that each of our disciplines have limitations.  Really feel like you hit a home run on this piece.”

Jennifer Poulin, PT, PRC sent us an article today that was published in the Lower Extremity Review magazine.

“There is a nice article on lower body mechanics of softball pitching.  I just read it and it is all about obtaining a neutral pelvis and powering the pitch with the glutes as well as the importance of lumbo-pelvic stability as a foundation of rehab and injury prevention in athletes.  Although the focus is on neutrality via the core not the hamstrings it does support a myokin model of securing the pelvis before the scapula can be in the proper position.”

You can read this article HERE!

Check out this article that Mike Cantrell, MPT, PRC wrote on thoracic positioning and thoracic scapular stability.  You can read it HERE! 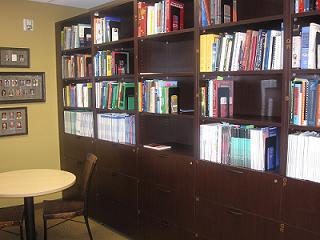 Over the last year, we have been working hard on the PRI Library.  We are happy to say that we are getting closer to completing this project!  The books have all been categorized and we are now working on articles.  Once we have completed this project, the PRI Library will be available for any clinician wishing to do research on PRI or anyone wanting to prepare for Postural Restoration Certification.

If you know of an article or a book that you feel belongs in the PRI library, please email us!

Bobbie Rappl
Posted March 28, 2011 at 9:33PM
Categories: Articles
0 Comments
“Breath Control May be a Relevant Area of Focus in the Management of LBP”

“Integrating AF IR and AF ER into Single Leg Dynamic Training” is the latest article written by Lisa Bartels, PT, PRC for the Performance Conditioning newsletter.  You can read it HERE!

We received this email from a PRI educated clinician in Minnesota:

“I just thought I’d pass on some information from a Nova program that was on television recently. A doctor was researching genetic abnormalities associated with muscular dystrophy. He was interested in this field because both his older and younger brothers suffered from the disease.

He found an area in the genetic sequence where muscle genes had been “turned off”. He then tested himself and others who didn’t have the disease and determined that normal individuals also had these genes “turned off.” He then studied the genetic code of chimpanzee’s and the great apes and discovered that their genes were still “on.” He then discovered that the genes in question controlled the size and strength of the masseter (jaw) muscle.

Human masseter muscle has been on the evolutionary decline for some time now and is a fraction of the size found amongst the apes. In fact, the great apes have a masseter approaching the size of our quadriceps muscle. I thought perhaps our muscles have declined because we eat more marshmallows than they do but the doctor had a better explanation.

The moral of the story is that improving human intelligence and brain size is more important than eating a tough steak.”

Bobbie Rappl
Posted November 12, 2010 at 10:36PM
Categories: Articles
0 Comments
Should you reach with the right or left hand?

Deciding which arm to reach with during PRI Non-Manual Techniques is a common topic that comes up.  Kurt Weidauer, DPT recently wrote an article that discusses this very topic.  You can read this article HERE!