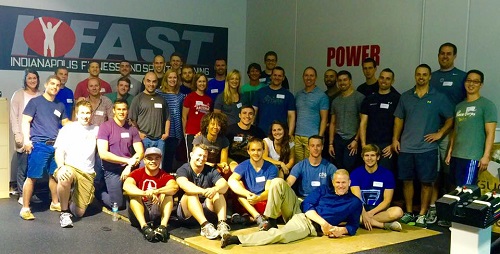 Bill Hartman up front as the host
With visitors from coast to coast
And the party that night
Was really a sight
As Lori made toast after toast! 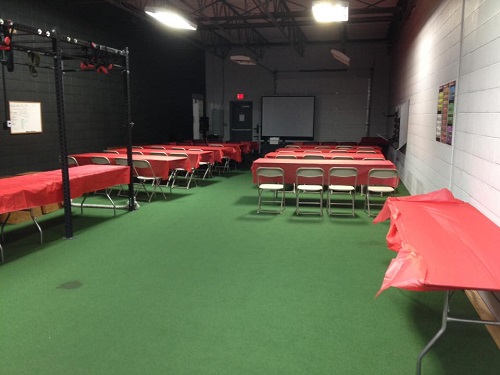 This past weekend I was in the company of giants. Art Horne (The Director of Sports Medicine at Northeastern University) and his team hosted The Postural Restoration Institute's secondary course called Impingement and Instability.  How fortunate I was to be the instructor for that class!  The group of 35 was eager to listen and more-importantly, share their experiences in the form of thoughtful questions and resulting dialogue.  It was that dialogue that ruled the two days.  We had such great exchanges that the learning became exponential as a result.  I feel as though i need to send a thank you note to each class member for what I learned.  Hopefully this reflection that I post will suffice.  Thank you Art and all the gang!  I look forward to my return to Boston. 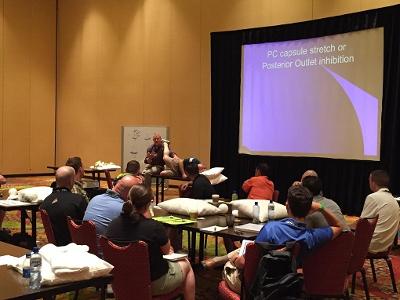 This past weekend, Professional hockey was formally introduced to PRI. Over the years, some ATC's, Strength Coaches, and PT's in hockey have found PRI and begun to successfully employ the techniques with their athletes. But, now at the behest of PHATS (Professional Hockey Athletic Trainers Society) and SPHEM (Society of Professional Hockey Equipment Managers), PRI was invited to their annual conference and I formally presented the entry level course, Myokinematic Restoration. The group consisted of 64 Athetlic Trainers and Strength coaches who learned about asymmetries, establishing neutrality, and trouble-shooting some difficult case studies. A big thank you to my two lab assistants, Kentaro Ishii and Kevin Neeld! By the end of the course, smiles and handshakes abounded and I was told to plan on returning next year to teach Postural Respiration. I was honored to work with such a fine group of professionals, and I won't soon forget my time in San Antonio, Texas!!! 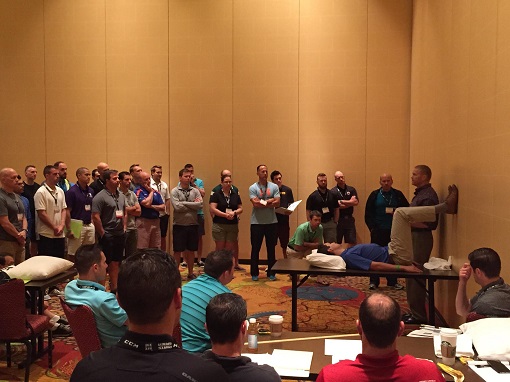 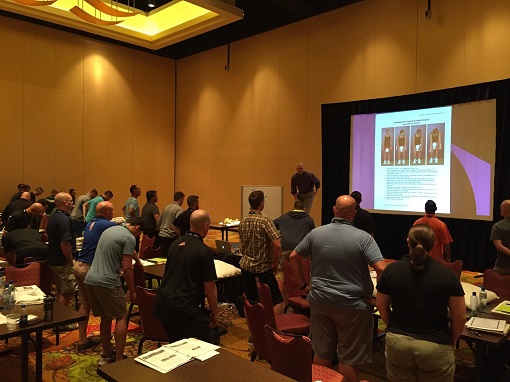 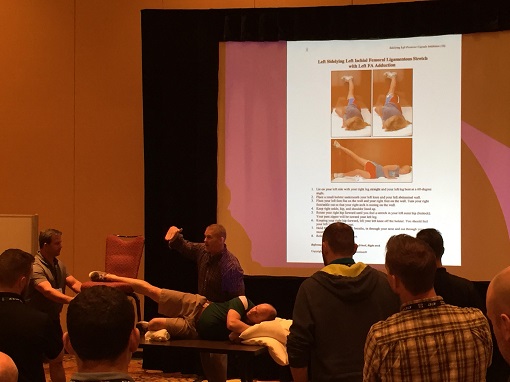 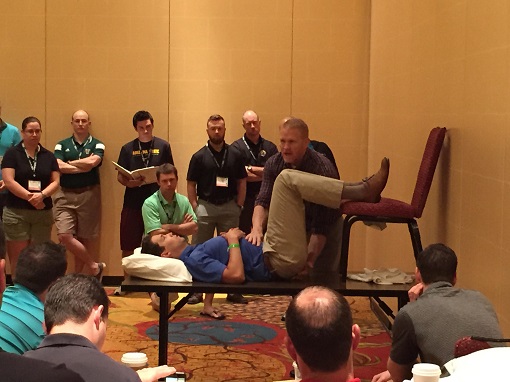 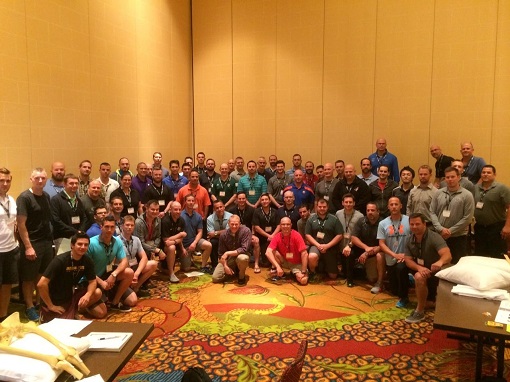 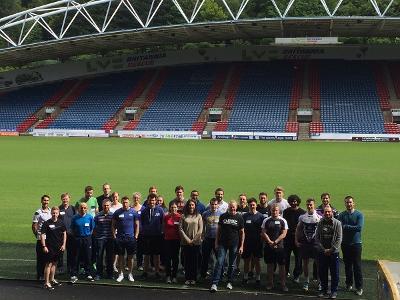 Just returned from the UK teaching Postural Respiration to a group of excited Physiotherapists from all over the kingdom and the Netherlands and Switzerland.  This is an exciting time to be involved in such cutting-edge science.  Thanks to all my new friends in England and especially Martin and Helen Higgins!!!

Last weekend I had the pleasure of teaching Postural Respiration at the Center for Neurosomatic Studies down in Clearwater, Florida.  I had a great time bringing this cutting-edge material to a group of eager and interested professionals.  My hosts Randall Clark LMT, BS and Kevin Wade LMT were more than kind and really rolled out the red carpet.  Thanks guys for a great weekend of fun and learning! 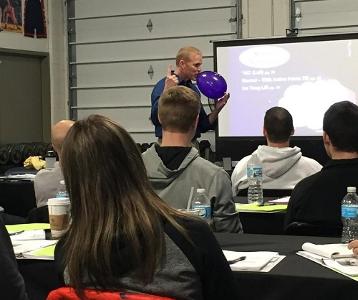 I found myself in Columbus, Ohio at Donskov Strength and Conditioning and there I was greeted by Anthony Donskov himself!  He and his brother Matt are the genuine article and are very learned in cutting edge performance training.  They welcomed people from all over the country to sit-in on the class I was teaching: Postural Respiration.  The facility was packed with superstars and we were all collectively grinning like a mule eating briars!  We had a blast, the weekend was over much too quickly.  I hope to return to Columbus sometime soon and hang with Matt and Anthony Donskov again!! 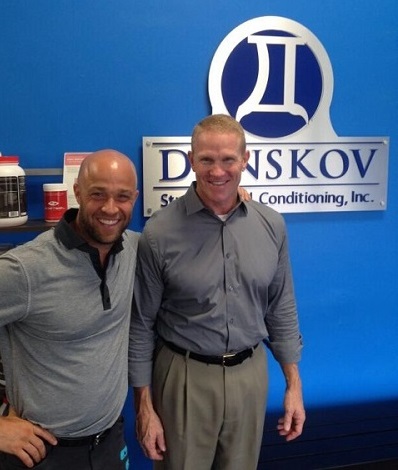 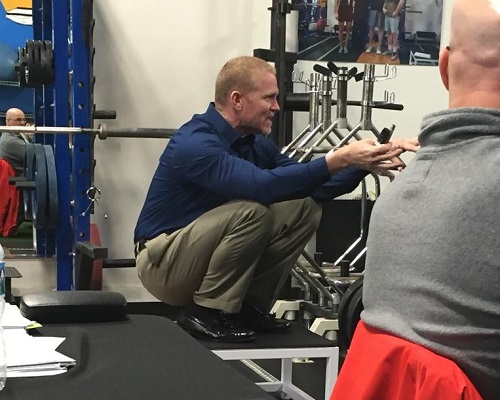 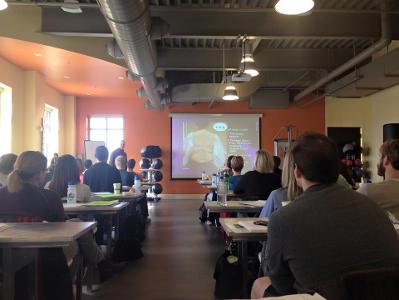 I had the pleasure of teaching Postural Respiration in Richmond, Virginia this past weekend. The group was attentive and eager and engaged.  We spent an inordinate amount of time with the concept of bilateral BC's and Superior T4's and the class sure got the picture.  Breathing IS walking and walking IS breathing.  Special thanks to Lori Strobl DPT, PRC and my dear friend Julie Blandin PT, ATC, CSCS, PRC for the wonderful help and for taking a few for the team!!!  Can't wait to return someday! 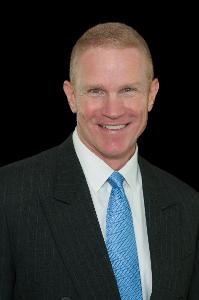 Ok, If we’re super in love with the right triceps for sagittal Right BC inhibition, aren’t we also loving the left biceps (long head) for the same reason?

Let’s consider not the long head of the biceps alone but the short head as well.

The scapula on the R is positioned in a state such that the inferior angle is moving posteriorly away from the ribcage and the superior edge is moving anteriorly toward the ribcage.  This is facilitated by pec minor activation and subsequent triceps inhibition.  Also, though perhaps to a lesser degree, the R biceps may act, via the long head, but also and possibly more importantly so, the short head (due to its attachment to the coracoid) synergistically with the pec minor.    And the end result can be biceps tendinitis.  One mechanism for reduction of the biceps activity is via triceps activation.  On an interesting side note I had a pt with right biceps pain and the first line of attack was to activate right subscapularis.  This was suggested because I already had him on a triceps program and he was neutral.  By engaging subscapularis I facilitated IR of the humerus which was now positioned in ER as a result of neutrality, which yielded prolonged inhibition of the subscapularis.  Subscapularis activation created internal rotation and internal rotation alone is sufficient to inhibit biceps, because it is a lack of internal rotation (as a compensatory strategy to manage system extension) that results in the alliance of biceps with anterior deltoid and upper trapezius on that R side.  This polyarticular chain of muscle which becomes a respiratory accessory muscle chain at this point can become so dominant that injury is an inevitable outcome if no intervention takes place.

On the L side the position of the scapula is opposite the R in many cases and subsequent activation of the L biceps may be necessary as a result of its positional disadvantage.  Likewise, inhibition of subscap may be necessary if it has been acting as a compensatory IR muscle to counter ER positioning.  To that end, we should also see a need for activation of teres minor and infraspinatus (following repositioning) on the L side as well.  Doing so can improve compensatory demands of internal rotation of the humerus when in the R BC pattern.   Compensatory internal rotation of the humerus could then possibly increase L pec major activity as it acts synergistically with subscap during compensatory L TR in the R BC pattern.  The end result of this patterning could easily create the need for L pec inhibition as a mechanism for L biceps activation!  Thus the mechanism for increasing biceps activity (as opposed to triceps on the R side) would be to improve rotation via reduction of the “alliance” of pec major and subscapularis.

One must understand that not everyone develops biceps tendinitis as a result of L AIC, R BC patterning however if it becomes the case then the above scenario are likely. -Michael Cantrell MPT, PRC 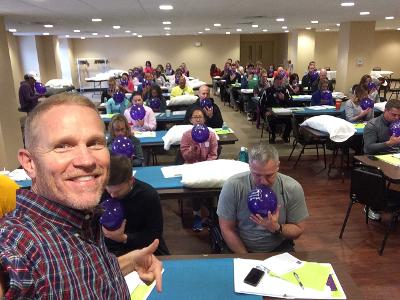 Almost 70 talented clinicians in Quincy, Illinois attended Postural Respiration on the weekend of January 24th-25th.   The majority of the group had taken Myokinematic Restoration last year and it was a pleasure to return to Quincy for round two.  We covered a wide range of topics (including balloon blowing!) and I have received multiple success stories since the course completed.  I think the group will love continuing the journey into Postural Restoration.  Thanks to Heather Jenny PT, PRC and to Lori Brinkman ATC, CSCS, PTA, PRC for all the lab assistance and a special thanks to Natalie Stratton DPT for all her help with the course set-up and wonderful hosting that she did!  Natalie, you’re the best! 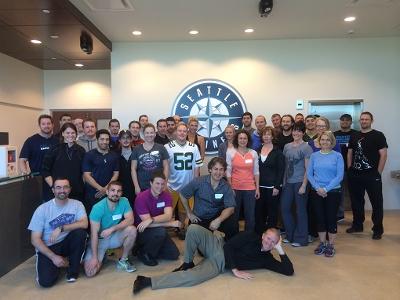 The weather was beautiful in Phoenix and the Seattle Mariners’ Spring Training complex was as well for Myokinematic Restoration last weekend!  We delved into the challenging subject of human kinetics and the relationship to baseball as well as general athletic performance. The class was eager and excited and I received many notations that read “Wow! This is a real paradigm shift for me!”  Thanks to all the participants in the sessions and a special thanks to Jimmy Southard, Head Minor League Athletic Training Coordinator of the Mariners organization for inviting PRI into his living room!!!  It was the best!!! 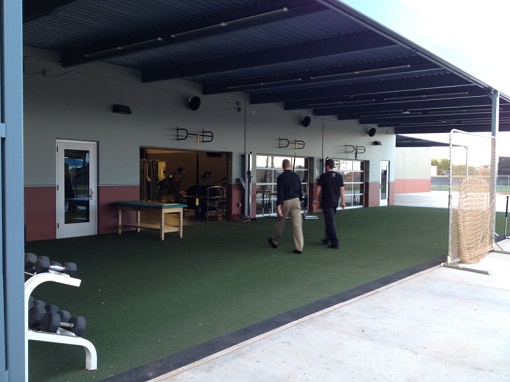 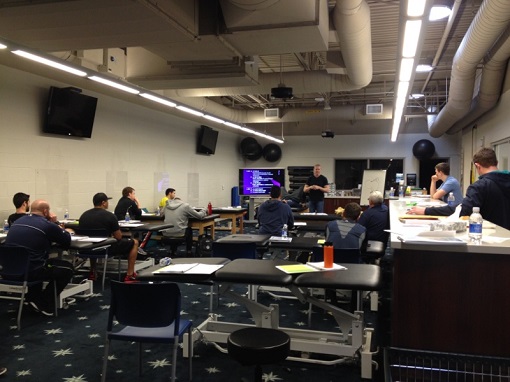 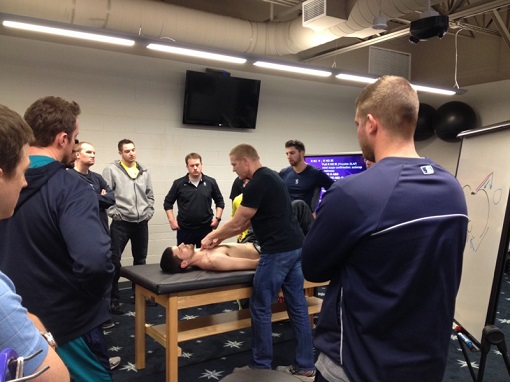 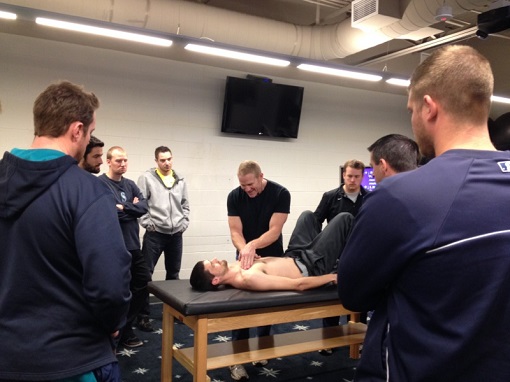 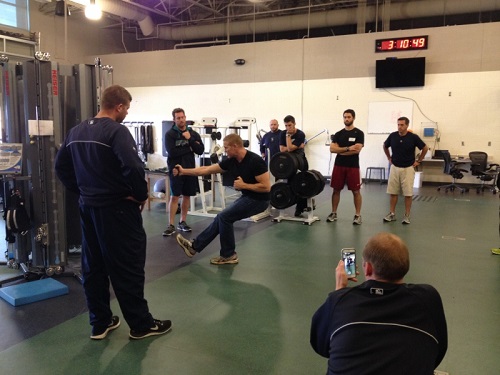