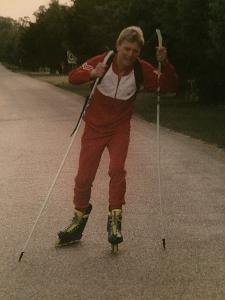 With the Postural Restoration Institute’s 2017 Annual Symposium on ‘de-stabilization’ fresh in mind, a recent in-service with colleagues yielded interesting findings.  One of the participants of the in-service was an physically active female who generally gets motion sickness easily and reported chronically tight hip flexors and right sided symptoms.  Interestingly, her hip flexors area are generally a no go zone with masseurs and therapists as she does not like them being touched at all.

Given the information presented at the symposium on motion sickness and how our bodies like to stabilize too much, I thought I would try a little experiment.  Upon testing it was found that she had bilateral limited SLR, bilateral positive HADT, positive right PART, negative left PART, positive right apical expansion and bilateral positive PADT. Felt her right leg weight bearing during gait in her normal shoes and difficulty with left centering.

I placed the PRI inserts given to us from the symposium in her shoes and upon walking felt different and could instantly feel her left leg weight bear. Then asked her to view the two moving ship videos from the symposium whilst in shoes with inserts in a left centering stance position, breathing of course. The video image was set up in a narrow corridor dimmed lights without visual lateral cues left or right.  Subject felt a little sway and a little motion sickness delayed but was coping ok. PRI testing again all testing negative and reversed the PART. SLR 90 degrees bilaterally.

Took the inserts out and got her to walk a little, instantly felt her right leg more. Viewed the ship videos again without inserts in left centering and was body swaying and feeling much more ill instantly. PRI testing again back to where she was at the start.  Inference, the inserts helped to ground the subject through the arches and outside border of the left heel allowing left ankle wobble and created talus instability in left centering.  This in turn, ‘de-stabilized’ her neurological system from being stabilized in the LAIC pattern thus helping her system cope with the visual cues of ships motion in the absence of lateral cues.  Of course, there are visual factors at play here, but what was cool was to see the total impact of a ‘destabilized’ neurological system and how it can be manipulated to improve not only this subjects function but also how it impacted on her motion sickness which ‘to her’ was something that the has never been able to influence.

Interestingly as well, during all PRI testing with the inserts in, her hip flexors were not as sensitive and I was able to place my hands on them without difficulty.  This also surprised the subject as this was not usual.  Thanks for the symposium and all that PRI has shown me as it constantly inspires me to look beyond. No Kangaroos were harmed in the making of this experiment.